At 48, Manju Ben Parmar has been weaving for nearly half her life. The cluster lead for a group of Tangaliya weavers, her job is to encourage more participation among the members. Tangaliya or Daana weaving is a craft unique to the Dangasia community of Surendranagar, Gujarat which, in recent times, is being revived by the government. Manju Ben and her family are among a small group of weavers living in the district who continue to engage in this 700-year-old weaving tradition.
While speaking about her first experience with weaving, she recalls how her father had been reluctant to teach her. But being the only girl with five brothers did not have any bearing on Manju Ben who was determined to learn the craft and so she would hurry through the day’s chores and join her father in front of the loom every night to watch him work. Sigani village where she lived with her parents was famous for its Tangaliya craft; the fine workmanship evident in the exquisite shawls that her father wove.
For all his reluctance, he taught her well. Today, she works on complicated patterns without anyone’s assistance. She also supervises her brother-in-law’s work and is helping him improve his weaving skills. “She is a much better weaver than I am, ” said Hasu Bhai of his wife who mainly works on stoles.

The couple has come a long way from their initial days as weavers. Previously, they received wages for the long and laborious hours that went into weaving each shawl but all of that has changed since they went into business themselves. No longer under a master weaver, they worked hard to build a reputation for quality products and connected with Rweaves, a rural livelihood initiative that sources shawls, stoles and material from the community and imparts training for developing contemporary designs.
Traditionally, Tangaliya shawls are woven out of wool but this was clearly affecting profitability so they switched to cotton products and witnessed a rise in income thereafter. To keep pace with production, it became necessary to invest in a new loom which they were able to buy using a Rang De loan. With improved efficiency, the business sees an income of Rs.7000 each month thanks to Rweaves as well as customers who directly buy shawls and stoles from them.
Occasionally, Hasu Bhai travels to Chennai, Bangalore and other cities to showcase and sell their best products at exhibitions held there. The couple’s business has been so successful that their three sons who are working at Ankleshwar are contemplating switching to weaving.
When we asked Manju Ben whether she had any plans for the future, she told us that she plans to step up production, invest in another loom and involve her two daughters-in-law who are familiar with weaving.
We are delighted to hear that Manju Ben has benefitted from her last loan and look forward to keeping more looms running in Surendranagar district.

In Gujarat's Surendranagar district, traditional craft brings in a living for many. Manju Ben Parmar is one of them. She is a weaver by trade and operates a loom out of her home as is the custom among weavers. She lives with her husband (also a weaver), three sons and a daughter. In spite of their circumstances, they have managed to provide good education for their four children. 45-year-old Manju has worked hard on her old loom and the time has come to have it replaced. She wishes to avail a loan of Rs.30000/- through Rang De to purchase a new loom.

This would enable her to continue working as a weaver and contribute to her family's income. Weaving is a time-consuming process. A single hand-woven saree can take more than a week to complete. It requires a great deal of skill and patience and these qualities are evident in Manju. Your investment towards her loan can help her in buying a new loom and ensure that her livelihood is not disrupted. 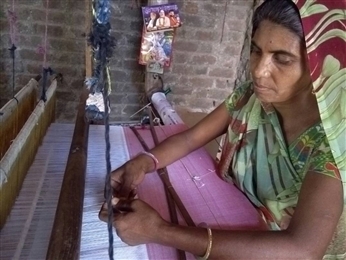 Evaluated 899 days ago by Tanvi Negi